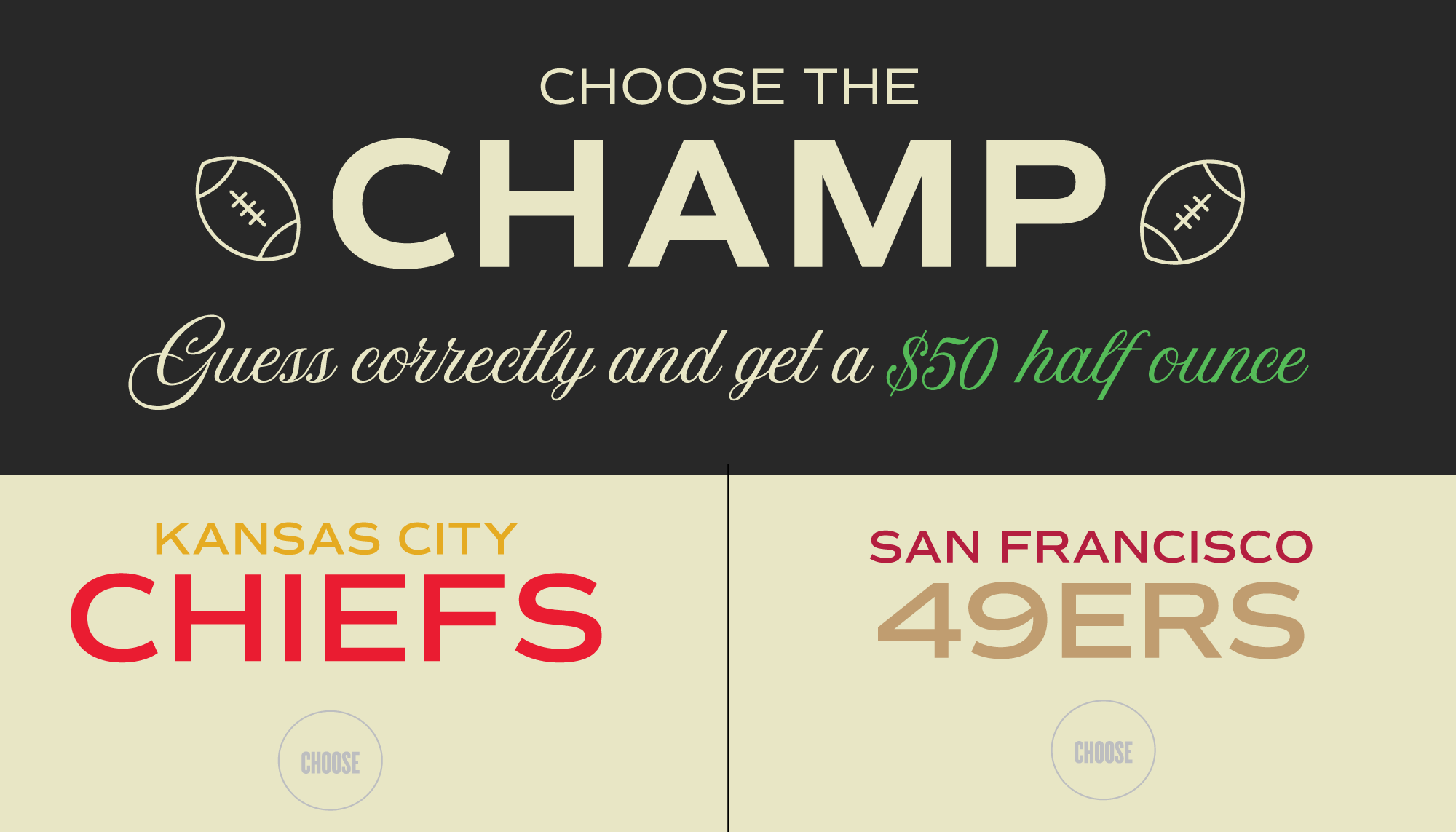 Guess correctly, and get a half ounce of Native Roots flower for $50. If your selected team wins, come back to any Native Roots location starting 2/3/20 - 2/9/20 to pick up your $50 half ounce. Limit one per customer.


NO PURCHASE NECESSARY TO ENTER OR WIN. MAKING A PURCHASE WILL NOT INCREASE THE ODDS OF WINNING. VOID WHERE PROHIBITED BY LAW.

3. Terms and Conditions: By participating in the Promotion, you fully and unconditionally accept and agree to be bound by these Official Rules, and you represent and warrant that you meet the eligibility requirements set forth herein. In addition, you agree to accept the decisions of Sponsor as final and binding as it relates to the Promotion. You agree that Sponsor shall retain full authority, in its sole discretion, to interpret and administer these Official Rules, and you agree to be bound by all decisions and interpretations made in good faith by Sponsor, or its designee.


VOID WHERE PROHIBITED OR RESTRICTED BY LAW, RULE, REGULATION OR ORDINANCE.

5. How to Enter: During the Entry Period, an eligible person (“Entrant”) may participate by entering a Native Roots Store and being issued a “Choose the Champ” card. The participant will select which team will win the Super Bowl. After informing the budtender of their selection the bud tender will “stamp” the participants card. The card will remain in the participants possession until the end of the entry period. Entries will be void if electronically or mechanically reproduced, forged, defective, altered or obtained through unauthorized channels or if they contain production, typographical, electronic, mechanical or other errors. Promotion is subject to change without notification in Sponsor’s sole discretion. Sponsor reserves the right in its sole discretion to disqualify any entry at any time which, in Sponsor’s opinion, is offensive, contains unsuitable material, endangers the safety or well-being of any person, or if it is determined the Entrant has not complied with these Official Rules. Sponsor is not responsible for lost, late, stolen, damaged, incomplete, invalid, un-intelligible, garbled, delayed, not visible or misdirected entries; all of which will be void in Sponsor’s sole discretion.

6. Prize: As used in these Official Rules, the “Prize” means, the ability for the customer that chose the winner of the Super Bowl to be eligible to purchase one $50 half ounce of Native Roots Flower for every winning card they possess from 2/4/2020 to midnight 2/10/2020 upon presentation of winning card.

7.A. Judging Criteria. Eligible entries will be judged and scored solely by the final score of the game held on Feb 3 between the Kansas City Chiefs and the San Francisco 49ners.

7.B. Responsibility for Prize/Taxes: If Entrant wins a Prize, Entrant understands and agrees that s/he is solely responsible for the use, care and maintenance of the Prize. Sponsor is not responsible for lost or stolen Prizes.


PRIZES ARE AWARDED “AS IS” WITH NO REPRESENTATION OR GUARANTEE OF ANY KIND BY SPONSOR, AND EXCLUDE ALL WARRANTIES, EXPRESS OR IMPLIED, ARISING BY OPERATION OF LAW OR OTHERWISE, INCLUDING WITHOUT LIMITATION, MERCHANTABILITY AND FITNESS FOR A PARTICULAR PURPOSE.


Any and all Prize-related expenses, including without limitation any and all federal, state, and/or local taxes shall be the sole responsibility of the winner.

7.C. Compliance with Laws: Receipt of any Prize offered in this Promotion is conditioned upon the Entrant’s compliance with these Official Rules and all state laws and regulations.


ANY VIOLATION OF THESE OFFICIAL RULES BY ANY WINNER MAY (AT SPONSOR’S SOLE DISCRETION) RESULT IN SUCH WINNER’S DISQUALIFICATION AS WINNER OF THE PROMOTION AND ALL WINNER PRIVILEGES WILL BE IMMEDIATELY TERMINATED.


If any provision of these Official Rules shall be deemed to violate any state or municipal law, it shall be amended to conform to such law and all other provisions shall remain in full force and effect.

RELEASE AND HOLD HARMLESS: BY ENTERING THIS PROMOTION, THE ENTRANT HEREBY AGREES TO RELEASE AND HOLD HARMLESS SPONSOR, ITS PARENTS, SUBSIDIARIES, AFFILIATES, ADVERTISING AND PROMOTION AGENCIES, AND THOSE ENTITIES ASSOCIATED WITH THE DEVELOPMENT, DISTRIBUTION AND IMPLEMENTATION OF THIS PROMOTION, AND EACH OF THEIR DIRECTORS, OFFICERS, EMPLOYEES, ATTORNEYS, AGENTS AND REPRESENTATIVES FROM ANY DAMAGE, INJURY, EXPENSE, COST, DEATH, LOSS, CLAIM, ACTION, DEMAND, OR OTHER LIABILITY THAT MAY ARISE IN CONNECTION WITH THE PROMOTION, WHETHER CAUSED BY NEGLIGENCE ON THE PART OF SPONSOR OR NOT, INCLUDING ALL CLAIMS OR THREATENED CLAIMS RELATING TO (A) PARTICIPATION IN THE PROMOTION; (B) ACCEPTANCE, POSSESSION, USE OR MISUSE OF ANY PRIZE; (C) PARTICIPATION IN ANY PROMOTION OR PRIZE-RELATED ACTIVITY; OR (D) ELECTRONIC OR HUMAN ERROR WHICH MAY OCCUR IN THE ADMINISTRATION OF THE PROMOTION OR PROCESSING OF ENTRIES.

8.A. Termination: Sponsor reserves the right, in its sole discretion and without notice, to cancel, terminate, modify or suspend the Promotion. Examples of reasons for termination or modification of the Promotion may include (without limitation) Sponsor’s inability to reasonably or fairly conduct or administer the Promotion due to business changes, viruses, malware, security breaches, non-authorized human intervention, fraud or other causes beyond Sponsor’s control. Sponsor reserves the right at its sole discretion to disqualify any individual who tampers or attempts to tamper with the entry process or the operation of the Promotion or website or violates these Official Rules.

ANY ATTEMPT TO DELIBERATELY DAMAGE ANY WEBSITE OR UNDERMINE THE LEGITIMATE OPERATION OF THE PROMOTION MAY BE A VIOLATION OF CRIMINAL AND CIVIL LAWS AND SHOULD SUCH AN ATTEMPT BE MADE, SPONSOR RESERVES THE RIGHT TO SEEK DAMAGES OR OTHER REMEDIES FROM ANY SUCH ENTRANT(S) RESPONSIBLE FOR THE ATTEMPT TO THE FULLEST EXTENT PERMITTED BY LAW.

8.B. General Rules: The Sponsor is not responsible for (i) late, lost, delayed, damaged, incomplete, illegible, misdirected or undeliverable correspondence; (ii) theft, destruction, unauthorized access to or alterations of entry materials; (iii) any typographical or other errors in the printing of these Official Rules, administration of this Promotion or in the announcement of any winner(s) or Prize(s); or (iv) phone, electrical, network, computer, hardware, software program or transmission malfunctions, failures or difficulties. By participating in the Promotion, Entrant acknowledges that Entrant has read these Official Rules and any other terms and conditions, rules, guidelines or policies applicable to the Promotion, and agrees to abide by them.

8.D. DISPUTE RESOLUTION: THIS PROMOTION IS GOVERNED BY THE LAWS OF THE UNITED STATES OF AMERICA AND THE STATE OF COLORADO WITHOUT RESPECT TO CONFLICT OF LAW DOCTRINES.


As a condition of participating in this Promotion, the Entrant agrees that any and all disputes which cannot be resolved between the parties, and causes of action arising out of or connected with this Promotion, shall be resolved.

INDIVIDUALLY, WITHOUT RESORT TO ANY FORM OF CLASS ACTION, exclusively before a court located in Colorado having jurisdiction. The Entrant and Sponsor hereby agree to WAIVE A JURY TRIAL in all actions and proceedings relating to the Promotion. Further, in any such dispute, under no circumstances will participant be permitted to obtain awards for, and hereby waives all rights to claim, punitive, incidental, or consequential damages, including reasonable attorneys' fees, other than participant's actual out-of-pocket expenses (i.e. costs associated with entering this Promotion), and participant further waives all rights to have damages multiplied or increased.